THE HABIT OF LEGITIMATE DISAGREEMENT 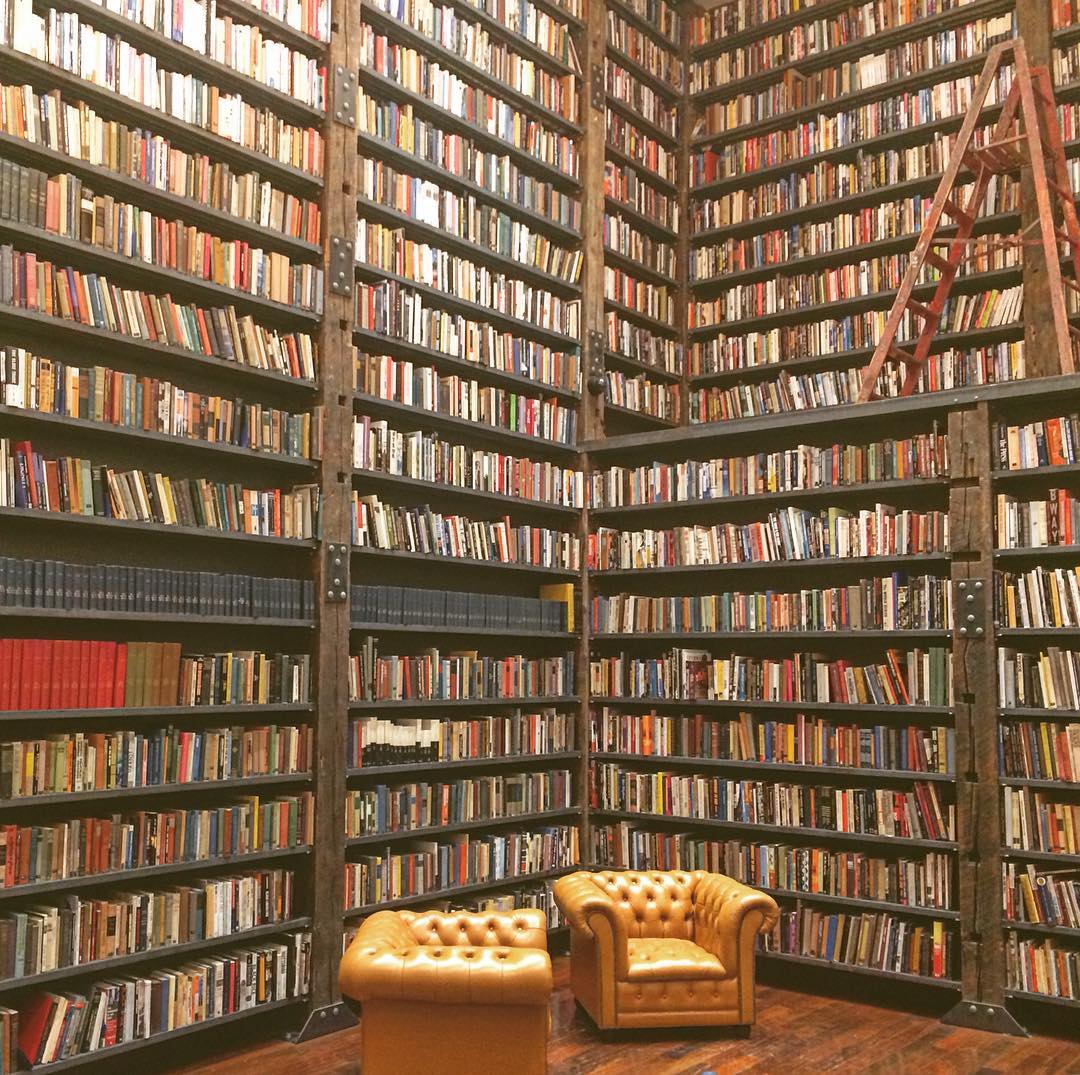 Shany Mor writes about Israel, democracy and foreign policy for a variety of publications. 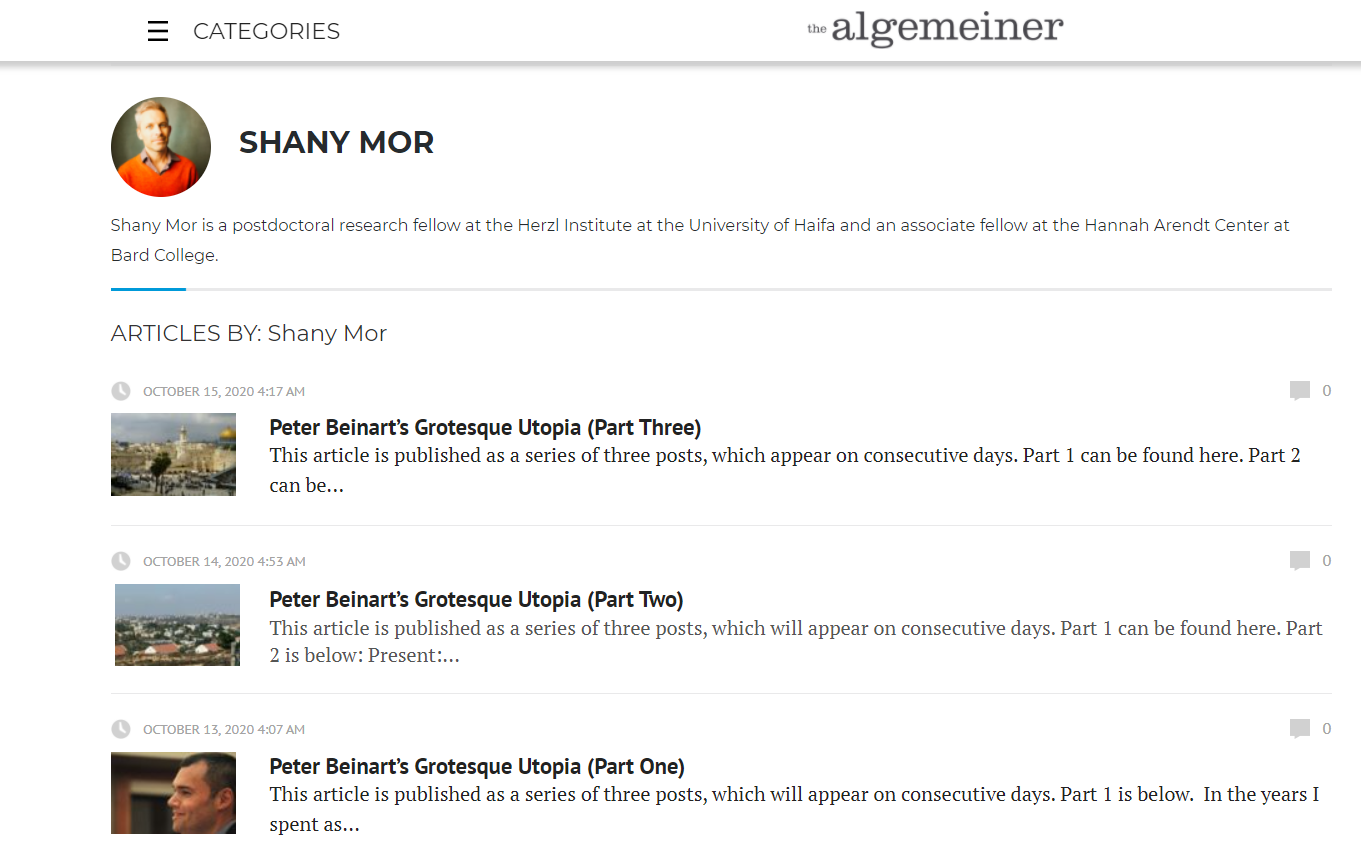 The Algemeiner, a global news destination published online and in print, serves as an independent media voice covering the Middle East, Israel and matters of Jewish interest around the world. 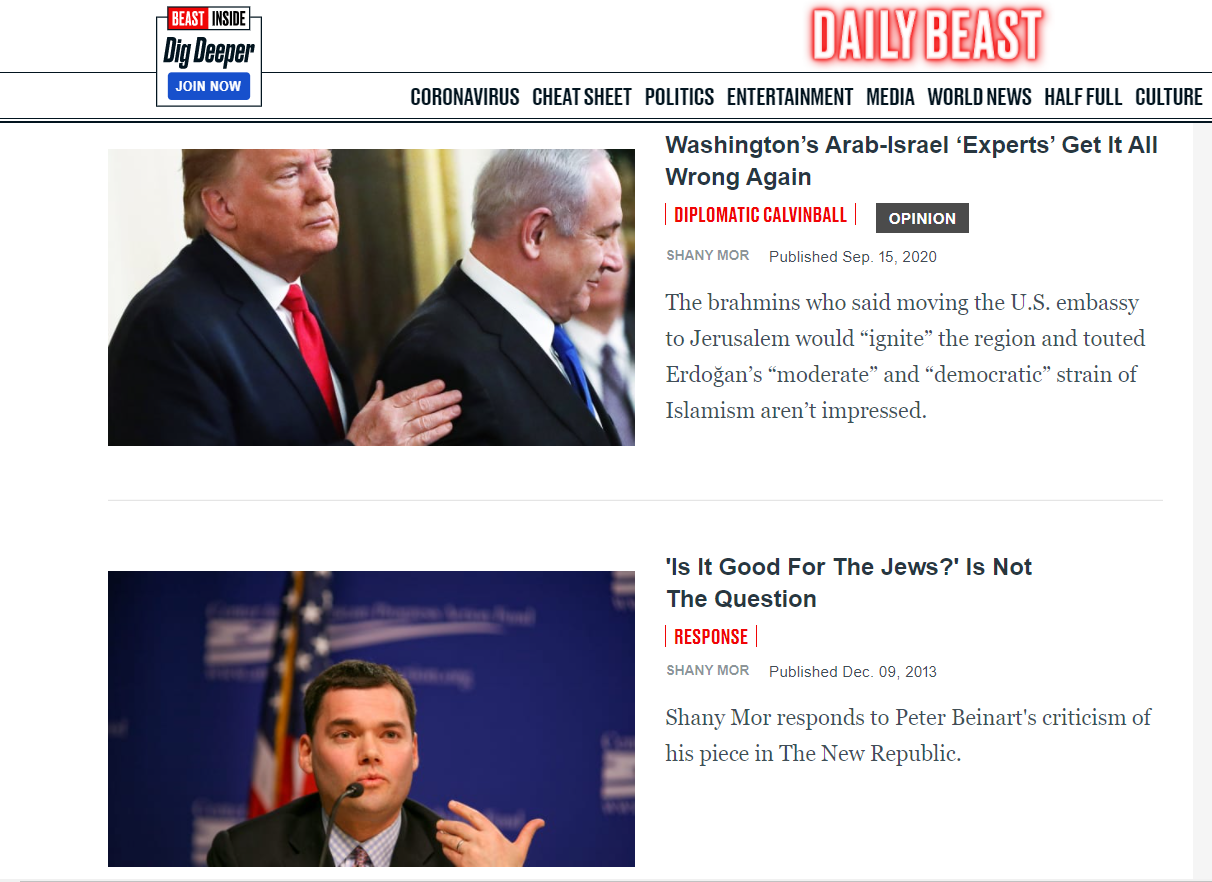 The Daily Beast delivers award-winning original reporting and sharp opinion in the arena of politics, pop-culture and power. 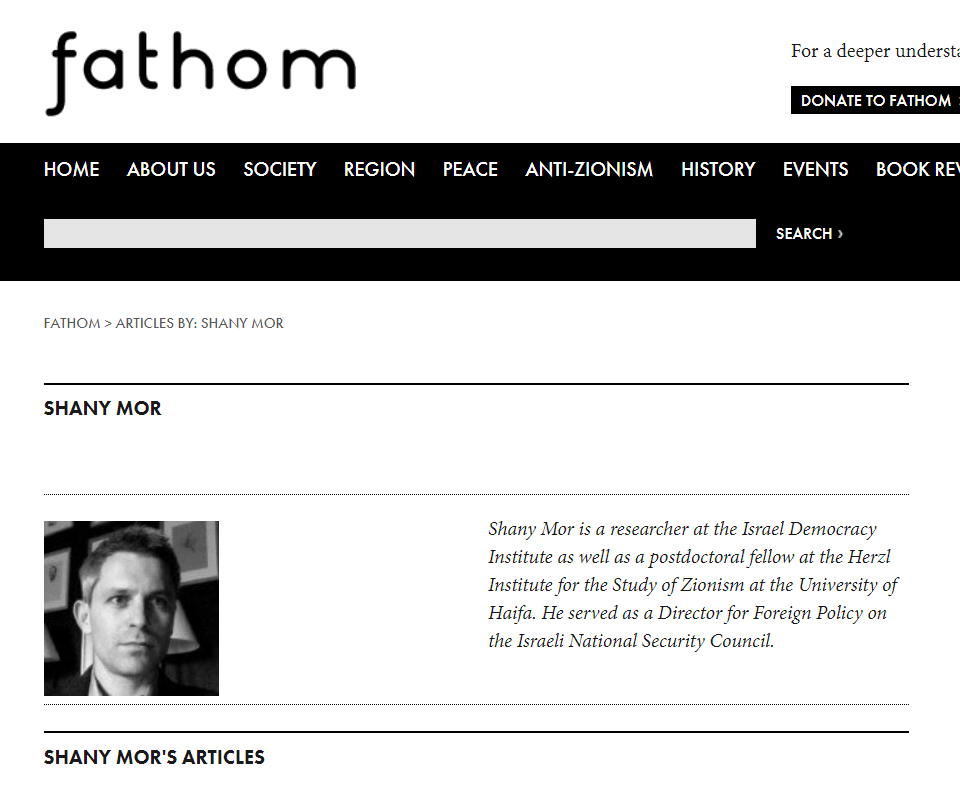 Fathom Journal is published by the Britain Israel Communications and Research Centre, an independent British organisation founded in 2001 to foster a more complete understanding of Israel. 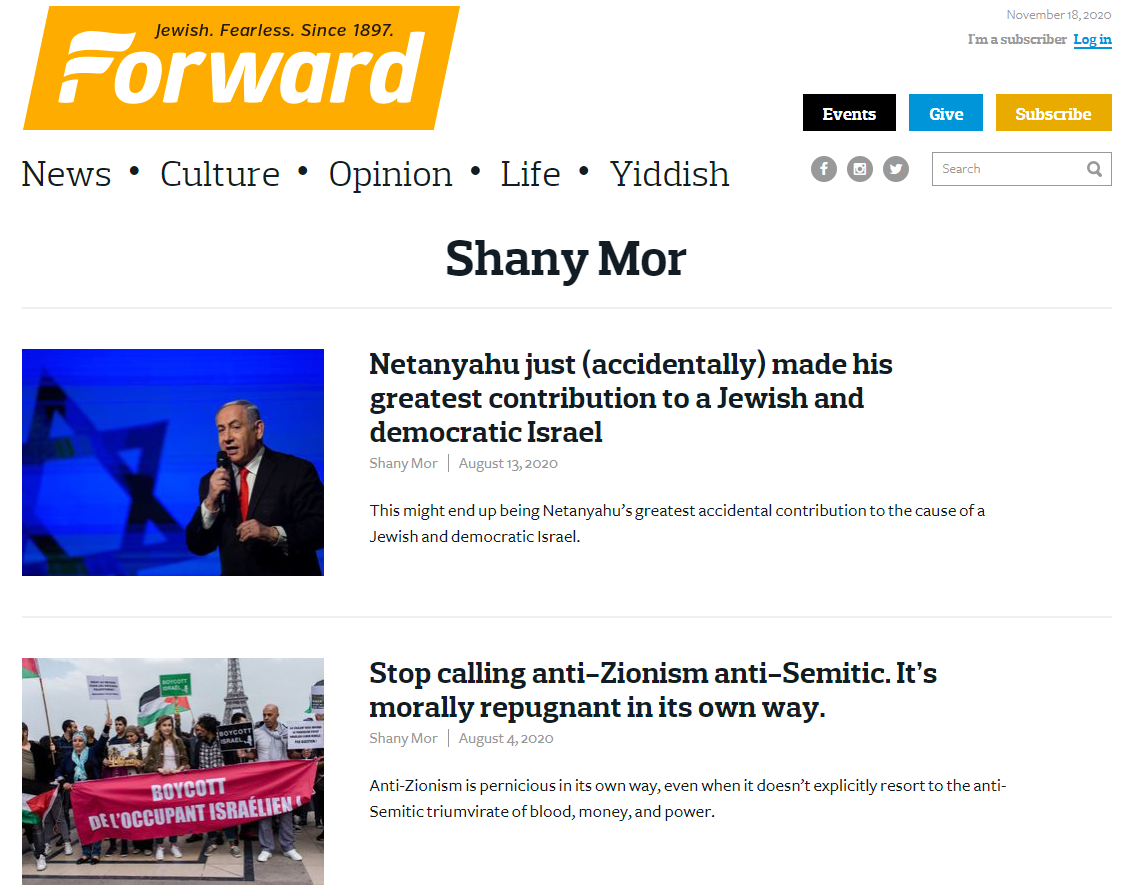 The Forward delivers incisive coverage of the issues, ideas and institutions that matter to American Jews. 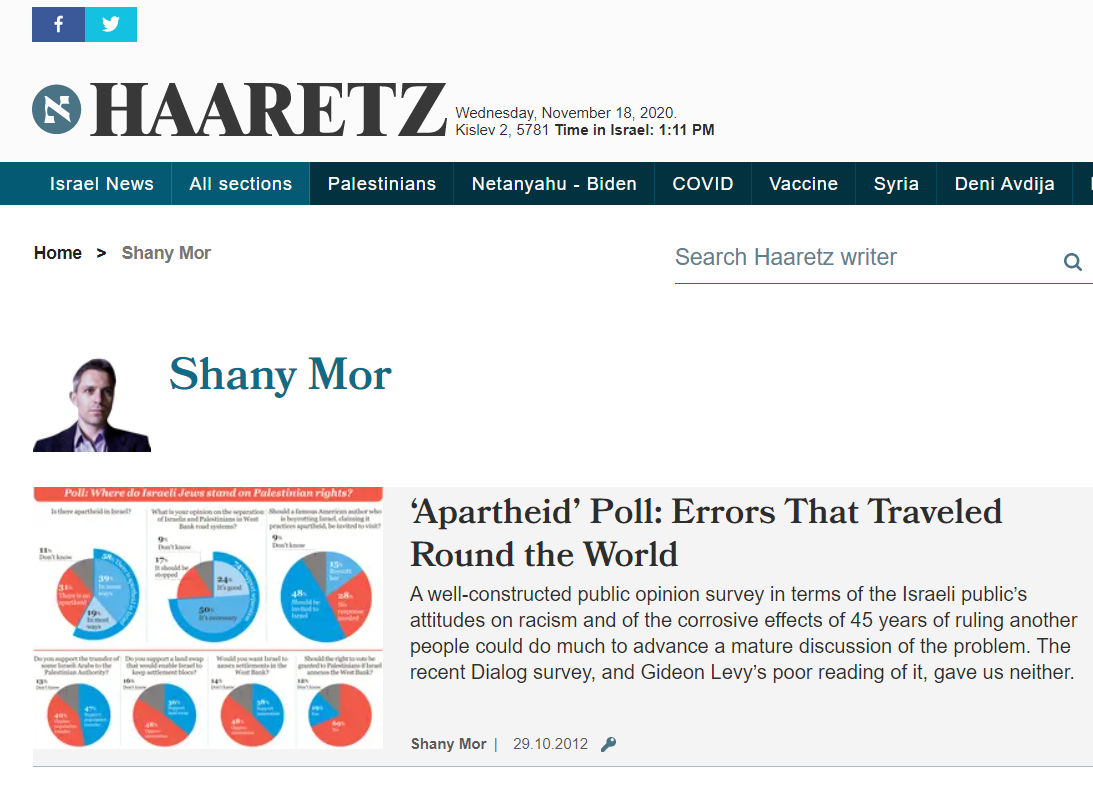 Haaretz provides extensive and in-depth coverage of Israel, the Jewish World and the Middle East, including defense, diplomacy, the Arab-Israeli conflict, the peace process, Israeli politics, Jerusalem affairs, international relations, Iran, Iraq, Syria, Lebanon, the Palestinian Authority, the West Bank and the Gaza Strip, the Israeli business world and Jewish life in Israel and the Diaspora. 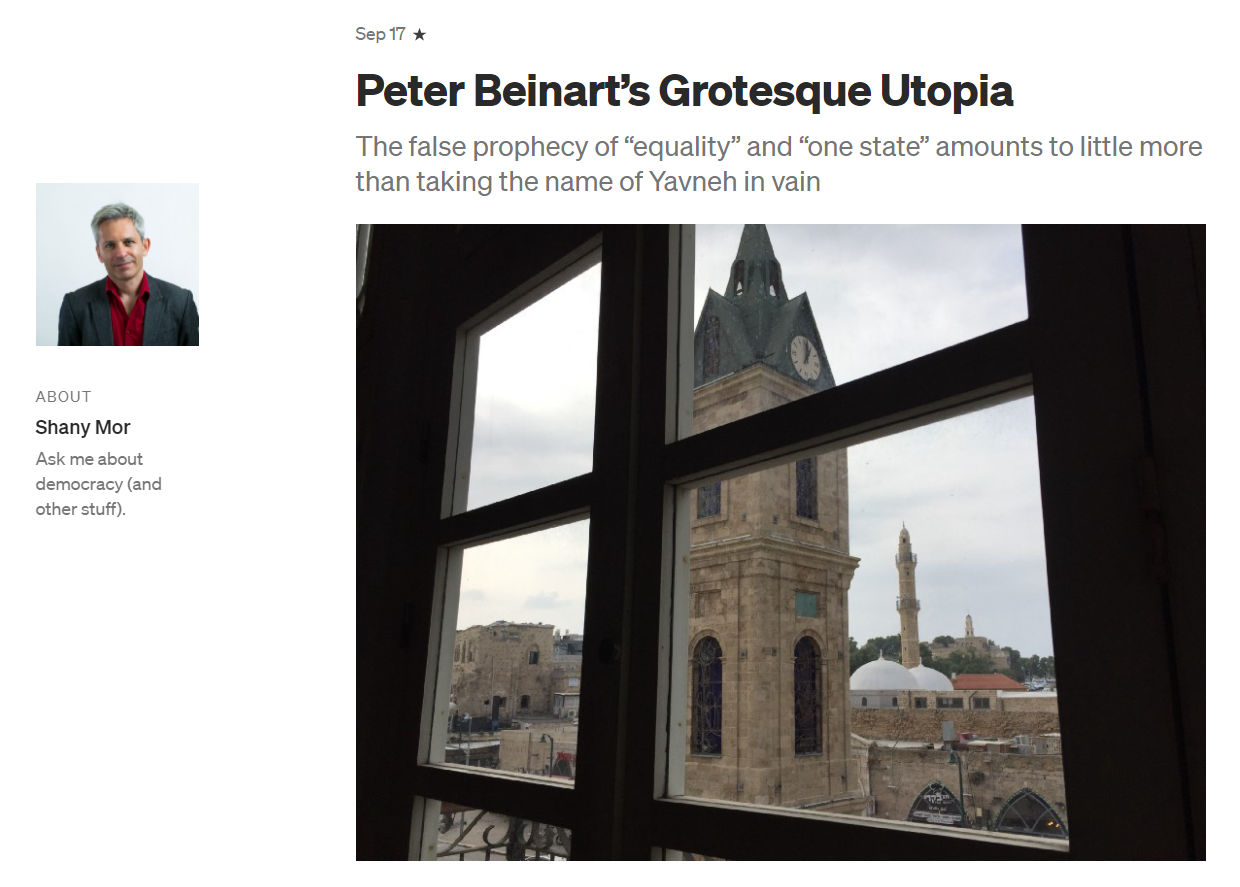 Medium is where ideas take shape, take off, and spark powerful conversations. An open platform where 170 million readers come to find insightful and dynamic thinking, expert and undiscovered voices alike dive into the heart of any topic and bring new ideas to the surface. 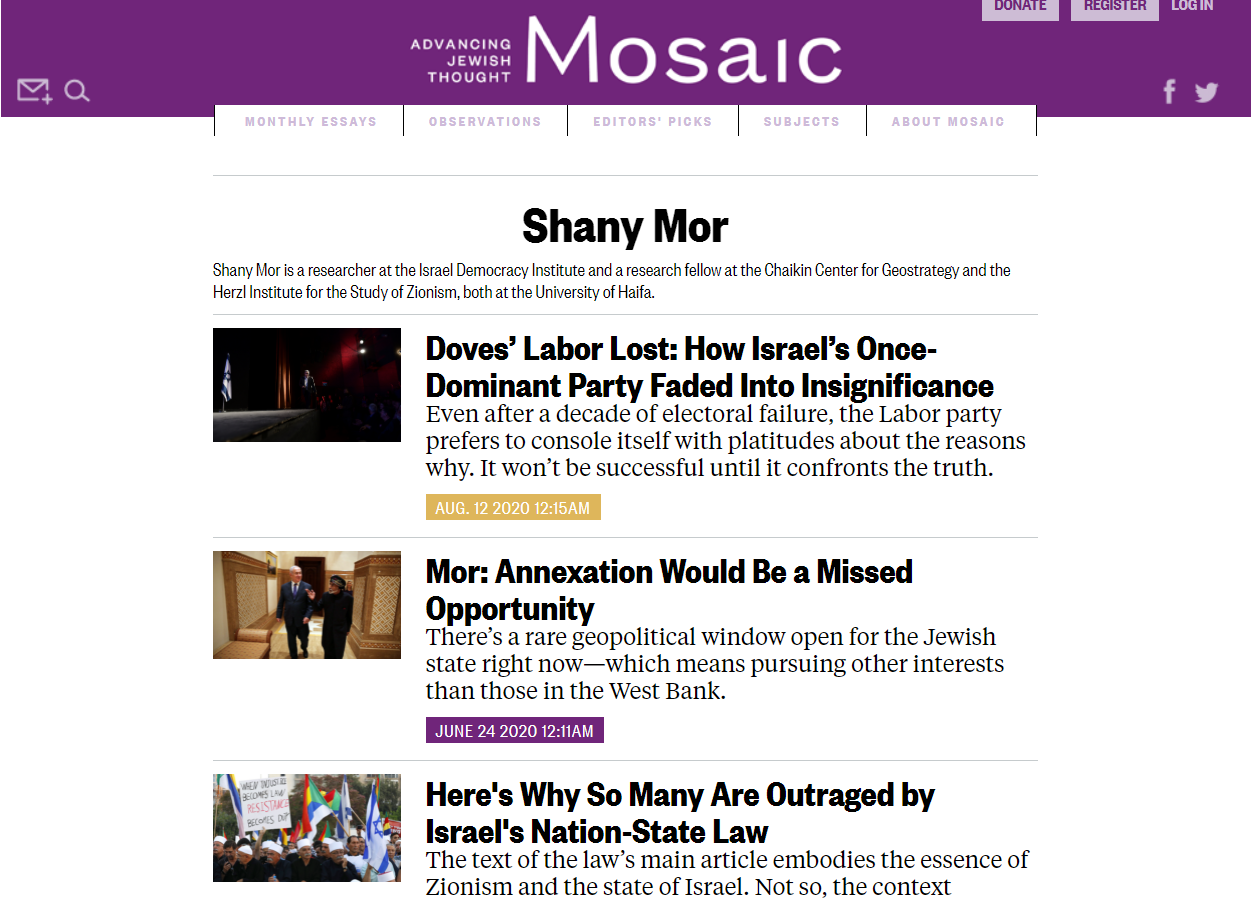 Launched in June 2013, Mosaic takes a lively, serious, and committed approach to Jewish issues and ideas. 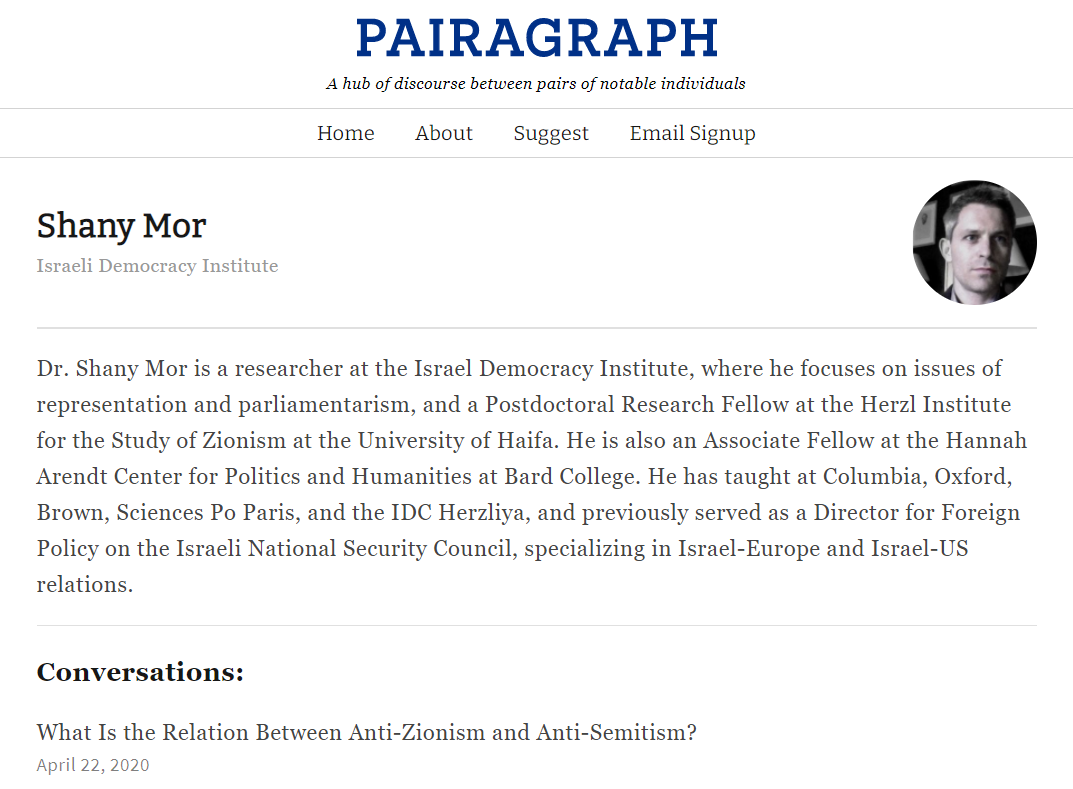 Pairagraph is a platform for written dialogue between pairs of notable individuals: in essence, an online meeting place for the world’s most prominent figures across government, industry, academia, religion, and the arts. 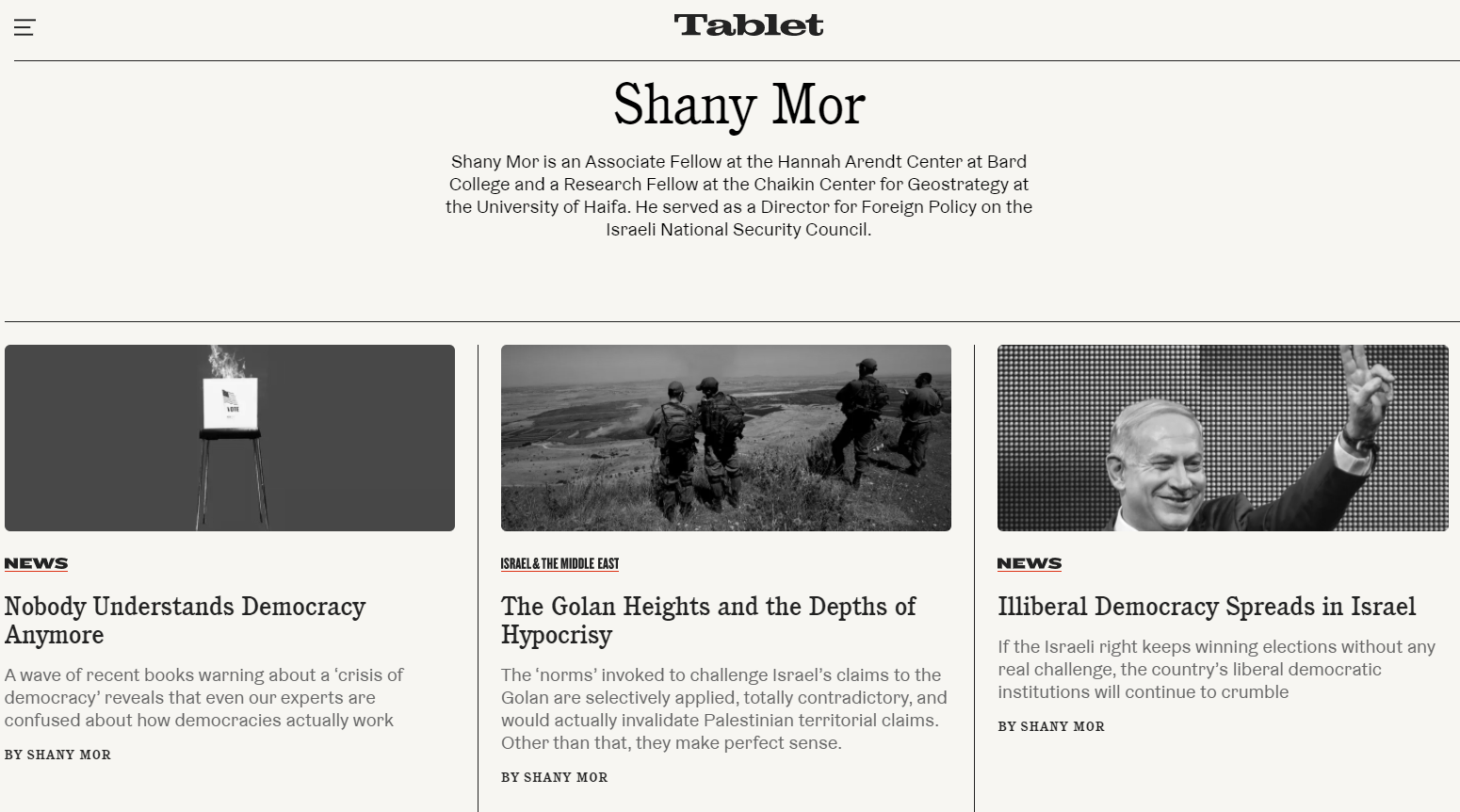 Tablet is a daily online magazine of Jewish news, ideas, and culture. 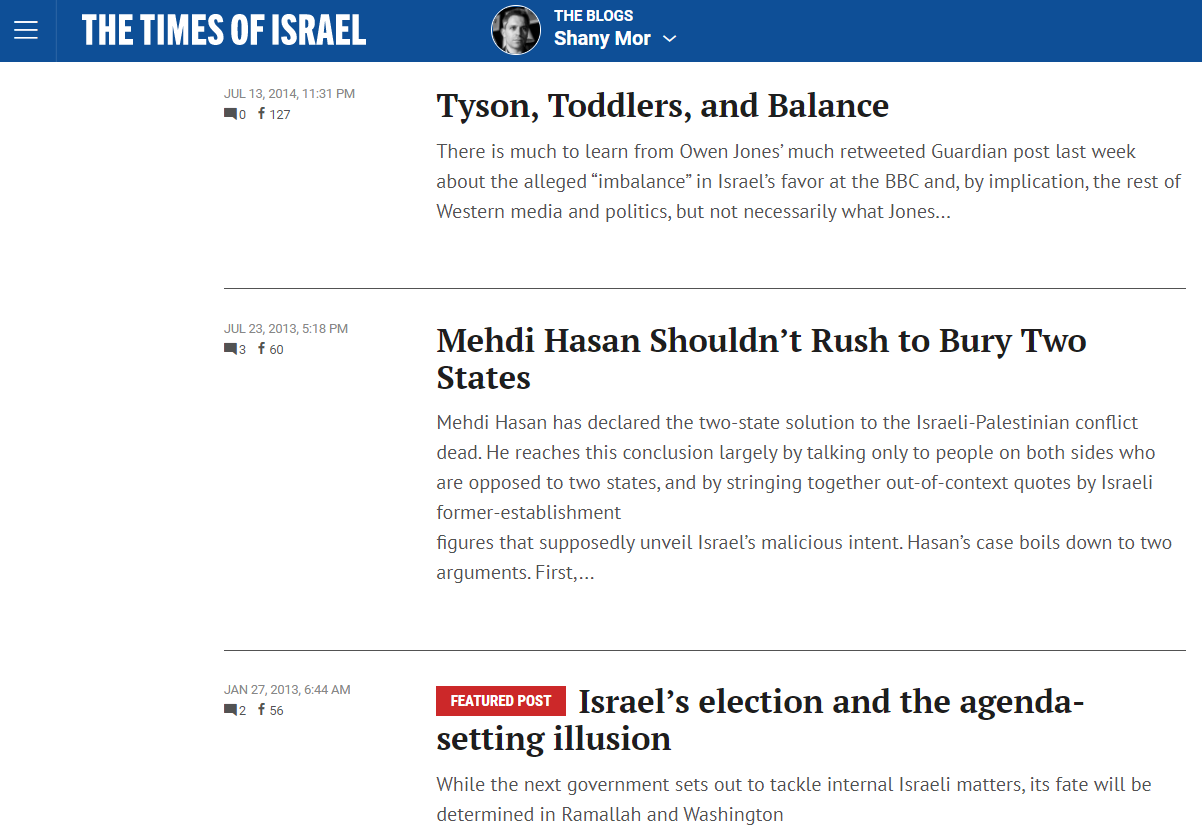 The Times of Israel is a Jerusalem-based online newspaper founded in 2012 to document developments in Israel, the Middle East and around the Jewish world. 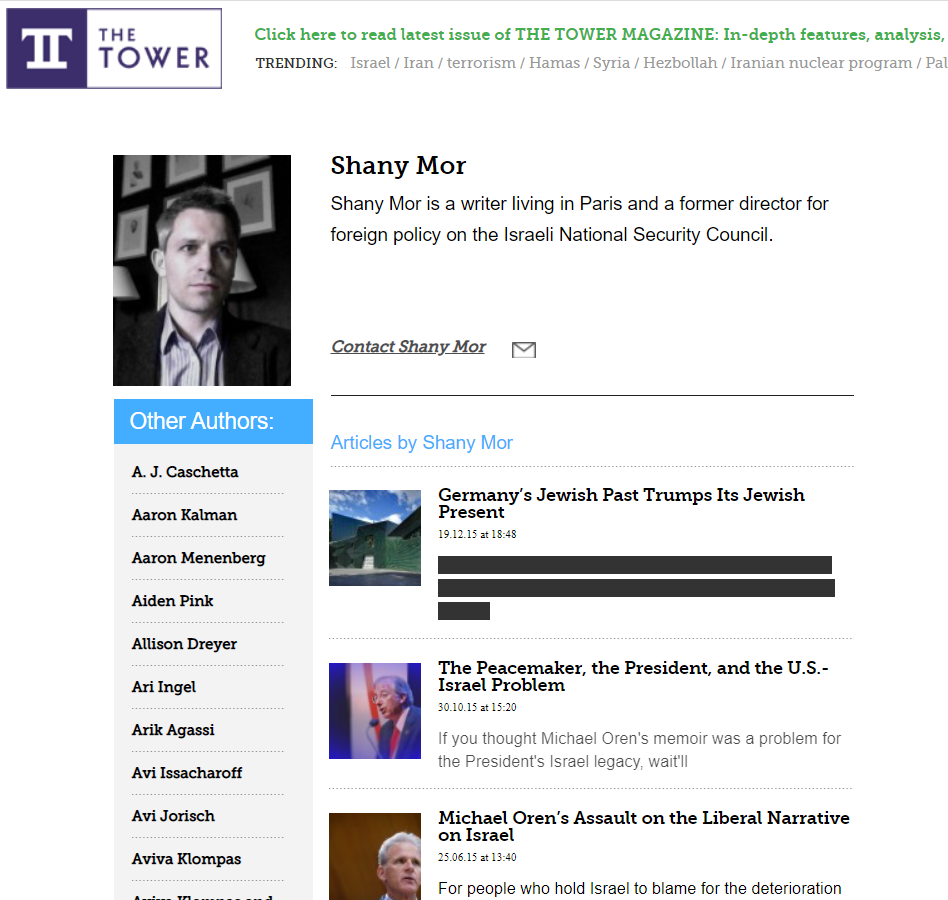 The Tower features real-time updates and analysis of geopolitical, security, economic, social and other events and trends affecting the Middle East and America’s interests in the region.

Shany Mor is a leading political theorist and policy consultant whose work brings to the fore expertise gained both as a scholar and a practitioner.  He has taught politics and international relations at leading universities in Israel, Europe, and the US, and has consulted for politicians and NGO’s on a host of issues drawing on his experience both as an academic and as a Director for Foreign Policy for Israel’s National Security Council, where he also headed the diplomatic desk in the situation room of the Prime Minister’s Office.

Since completing his doctorate at Oxford in Politics and International Relations, Mor has been an in-demand policy analyst in Israel and around the world, appearing regularly on a wide range of radio shows, television programs and think-tank panels in English, Hebrew, and French, while writing for countless publications including numerous articles with frequent collaborator and former Israeli MK Einat Wilf.

In between speaking engagements and authoring highly acclaimed think pieces Mor maintains fellowships at the University of Haifa and at the Hannah Arendt Center at Bard College, and works as a researcher at the Israel Democracy Institute where he studies parliamentarism while writing his forthcoming book with Oxford University Press, A Theory of Political Representation. 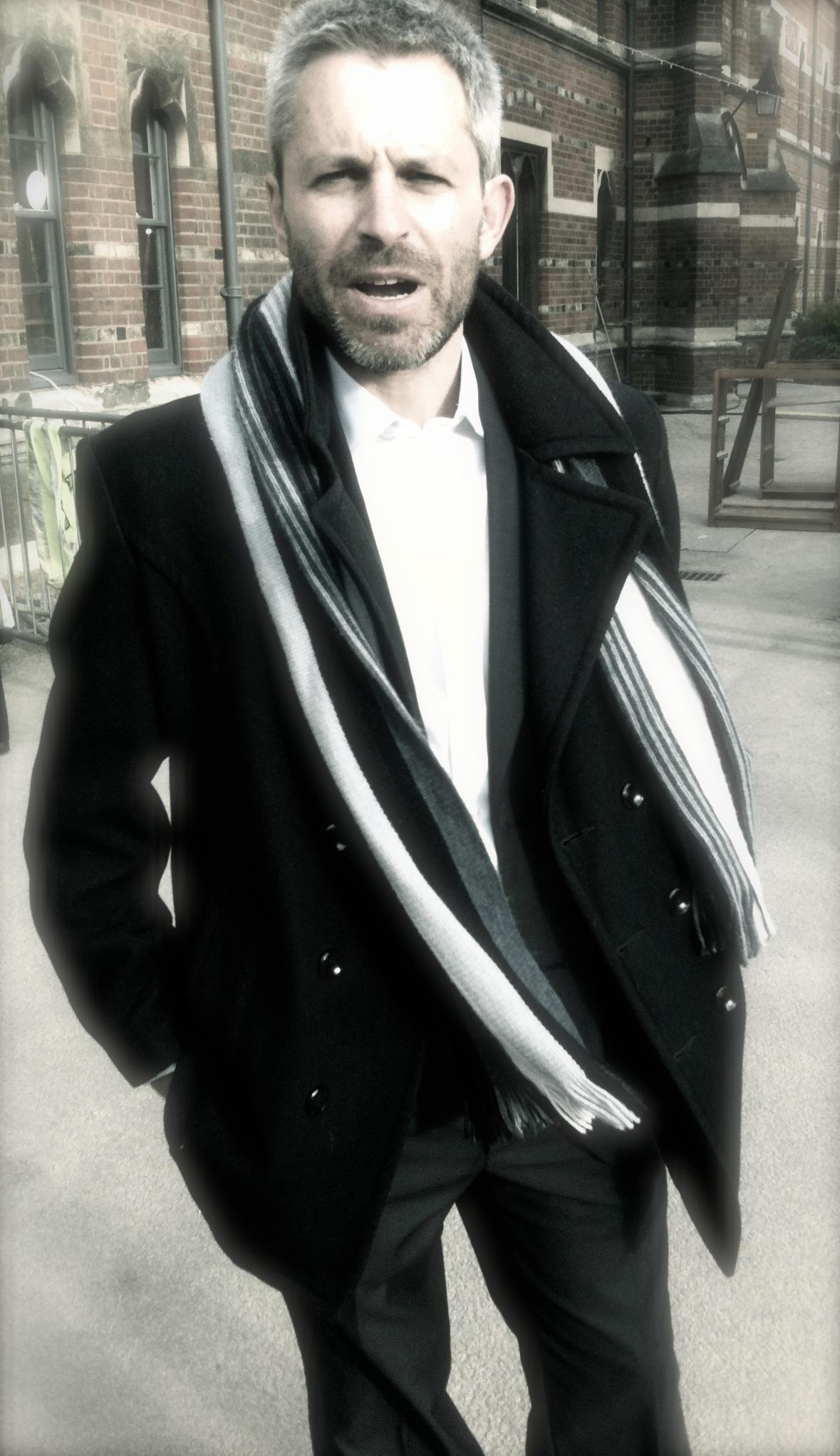 Bernie Sanders and the Democrats (Hebrew)

Theresa May and Brexit (Hebrew)

US President vs Intelligence Agencies on North Korea (Hebrew)